Estimates and Future Projections of Demography

The simplest and most commonly used index of fertility is the Crude Birth Rate (CBR) which is the number of births divided by population expressed in thousands. In 2016, the CBR of the municipality is 21 or 23 live births per 1,000 of population. The local trend in CBR fluctuates during the last five years but is generally on the range of 20 to 25 and fertility is generally decreasing. Mortality or the occurrence of death is roughly measured by the Crude Death Rate (CDR) which is the number of deaths per 1,000 of population. The 2016 CDR is 6.38 deaths per 1,000 of population. The CDR of Irosin for the past five years ranges from 7.95 to 6.38 and mortality rate is generally decreasing. Irosin’s CBR in 2013 is 22.6 which is lower than the national CBR of 24.4 in the same year. For CDR, the national rate is 6.52 in 2016 which is higher than the local CDR of 6.38. (Refer to Table DE-7) 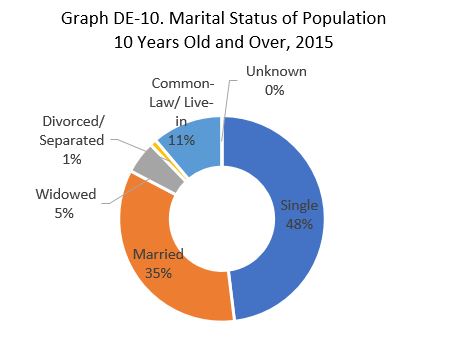 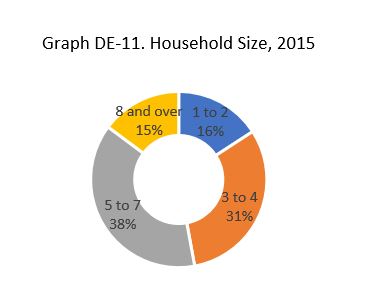 The 2015 urban population is 14,839 or 25% of the total population while the rural population is 42,273 or 75% of the total population. Households distribution is 26% or 3,113 are in urban barangays and 74% or 8,865 are in rural barangays. The most populated barangay is the urban barangay of Bacolod with a population of 4,518. Among the contributory factors leading to the high population of Bacolod is its proximity to town center or the central business district (CBD), the high density of housing units and the presence of informal settlers in the river control dike and at riverbanks. The second most populous barangay is the rural barangay of Monbon with a population of 4,414. Monbon’s population growth is attributable to its location being alongside the national highway and relative proximity to town center, its vast coconut lands in moderately level slopes which are also used for residential purposes, and the presence of tourism establishments. Gabao, a rural barangay with a population of 4,286, is the third most populous barangay. Gabao is strategically located at the center of a catchment area covering the barangays of Bulawan, Tongdol, Gumapia and Gulang-gulang. The barangay is a nodal growth center in the area and with a growing commercial hub. The urban barangay of San Pedro is the fourth most populous barangay with 3,154 population. San Pedro is the largest in terms of land area among the urban barangays, contains part of the CBD, is traversed by the national highway and the site of major institutions. (Refer to Table DE-3) 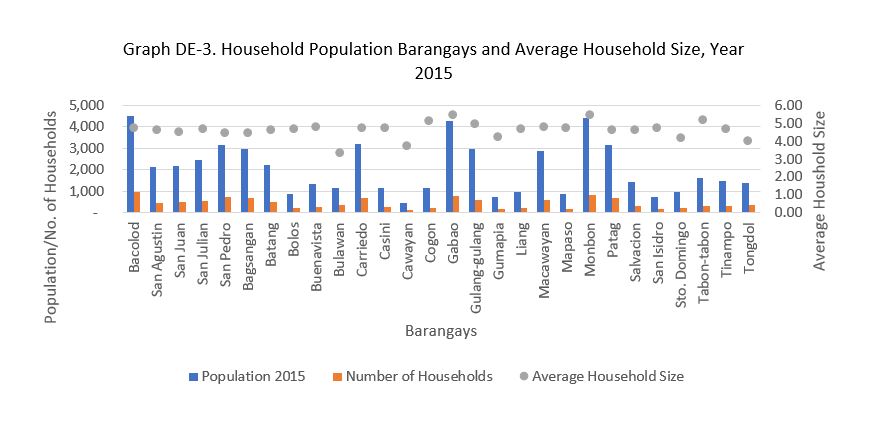 There is a declining urbanization level, or growth in the proportion of population living in urban barangays, in the past 25 years. In 1980, 36% of the population are living in the urban area and the proportion dropped to 31% in 1990, to 27% in 2000, 26% in 2010, and to 25% in 2015. This declining trend is correlated to the disparity in the population growth rate of rural and urban barangays. The annual growth rate of urban barangays from 1995 to 2015 ranged from 0.34% to 1.15%, while the rural barangay’s growth rate ranged from 1.41% to 2.98% in the same period. The main factor contributory to this trend is the constraint on the availability of land for expansion of built-up areas in the urban barangays. The urban densities of San Julian, San Juan, San Agustin and Bacolod are at its highest. The expansion of built-up areas in San Pedro, which has a large land are, is constrained by the presence of irrigated rice lands. In comparison, 14 % of Sorsogon’s population lives in urban barangays in 2015. (Refer to Table DE-4)

Gabao is the fifth based on its population, population density and the built-up density. Gabao is the main nodal growth center in the west quadrant of the municipality and has the highest area of built-up land uses outside of the urban barangays. Monbon which is the most populous rural barangay ranks sixth in the hierarchy. Monbon is also a growth center for tourism and has significant built-up area. The barangay of Patag occupies the seventh rank in the hierarchy of settlements based on its population and its role as the nodal growth center in the eastern quadrant.

Male population is slightly higher than the female population during the census year 2010 and 2015. There are 103 males for every 100 females. The local age-sex distribution follows a worldwide pattern in which males predominate at birth but the ratio gradually declines with increasing age presumably because males have higher age-specific mortality rates. Consequently, females tend to outnumber males as their age advances. For the age group 65 and above, the ratio is 64 males for every 100 females in 2015.